We - Avishkar Hyperloop , Student Team from IIT Madras – working on the Hyperloop concept , met TeamIndus - developing the world’s First private mission to the moon , on 9th June 2018, at their headquarters in Bangalore. And the outcomes were as expected: a very engrossing, comprehensive and inspiring discussion with highly motivated and talented members of one of the most ambitious organizations in India. 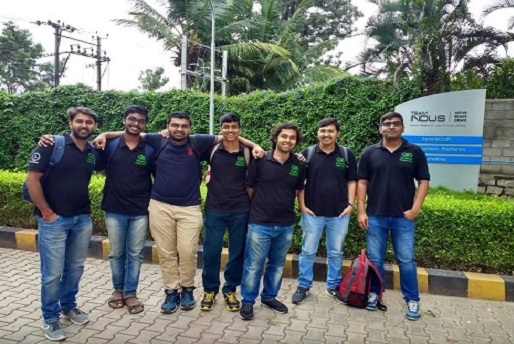 Team Avishkar is representing INDIA and IIT Madras at the International Hyperloop Pod Competition organized by SpaceX. We are striving hard to ensure ingenious research and development for building the First ever Self Propelled, Completely Autonomous, Fastest Hyperloop Pod of INDIA and helping humanity move one-step closer to achieving an incredible new mode of transport. Our design for the Hyperloop Pod is among one of the top 47 designs shortlisted by SpaceX, out of more than 1000 designs submitted from all around the globe. We aim at transcending the way people transit.

TeamIndus which started off as a small team, initially comprising of a group of friends, participating in the Google Lunar Xprize Competition in 2010 is now an established private organization, spearheading country’s attempt in developing spacecraft technology to carry a suite of commercial and experimental payloads to the moon. They are revolutionizing space exploration by developing low cost ingenious robotic rovers and carriers, further facilitating country’s first major leap in the field by a private Indian institution.

Both the projects require a dedicated team, intensive R&D, huge capital and of course, perseverance to develop such engineering marvels. So, we arrived in Bangalore city with an aspiration to get the gist of what lies ahead of us in the coming future, with regard to the competition as well as for scalable practical implementation. We had a great interaction with some of the very prominent members of TeamIndus. The discussion which was estimated to end in 90 minutes, lasted for around 3 hours!

The discussion started with a short introduction about the goals, efforts and future plans of both the teams, bringing both of them on the same page. As the conversations deepened, all the diverse aspects involved in the design, simulation, experimentation and implementation phases were thrown light upon at various analytical and practical levels. The conversation also gave a 'thumbs up' assurance to the ways of execution of work with such a large number of team members involved, working on finding solutions to complex engineering problems . The discussion also involved suggestions about increasing the work efficiency and quality of work as well as following strict deadlines, guiding the pathway for further improvements. It also directed Team Avishkar on representing itself at the national and global scale, influencing as many lives as possible.

We are very grateful to TeamIndus for providing us their valuable time and ensuring that this interaction took place. There’s a lot to learn and it’s a long but an enlightening journey ahead. Best wishes to TeamIndus for all their space adventures and their motivational influence across the country and beyond!