In a galaxy far far away:

It's the spring of 2020 at the abuzz IIT Madras campus; the fresh batch is settling into the campus vibe! The ever-confident Avishkar Hyperloop team @ workshop is rocking at full throttle.

Back to this reality, where even normal is a dream, one thing remains the same: The confident Avishkar Hyperloop team, though not at campus, is still rocking at full throttle. 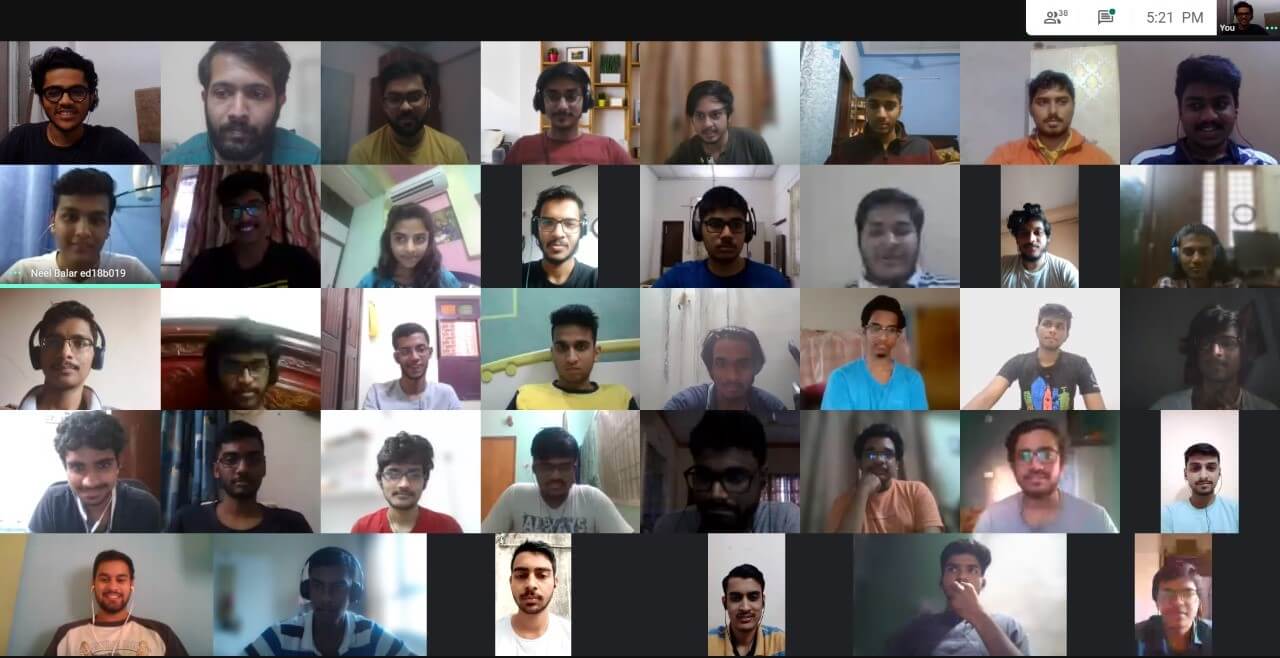 Figure: An all team meet in progress.

The pandemic has forced us to work remotely, but we're still doing pretty well and European Hyperloop Week is an exciting opportunity that we are working upon enthusiastically.

The European Hyperloop week is an event that brings the Hyperloop community together to facilitate the transition from the concept of Hyperloop to an actually feasible system. It provides a platform for conceptual or operational demonstration of subsystems of Hyperloop. The European Hyperloop Week, to be held in July 2021 at Valencia, Spain, calls for all forces to work together and scientific exchange among everyone involved. The competition has four stages: first, submitting the Intent to Demonstrate (ITD) document which is the preliminary design report, second, submitting the Final Demonstration Documentation (FDD), third, Testing and Safety Documentation (TSD). Finally, attending the EHW in Spain and demonstrating the different subsystems and Pod run.
Team Avishkar has already expressed its intention to demonstrate its pod and different subsystems to the international audience at Valencia, Spain, and is preparing towards it.

After onboarding new talent into the team in October, we got started on the pod design with much vigour. Though online classes brought us an entirely new learning experience, which we took a while to get used to. This remote learning also meant that we could only desire the usual get-togethers and all-nighters at the CFI workshop and had to manage solely through virtual meetings. With the ITD submission deadline and end-semester examinations clashing, it felt impossible that we could pull off both of them parallelly. But after lots of brainstorm-simulate-fail loops and hundreds of hours of collective effort, we have come victorious with the fantastic design of the Avishkar pod 3.0.

This pod iteration has a lot under its shell. We have implemented new physics in many pod modules, like implementing the Linear Induction Motor for propulsion and regenerative braking; replacing friction braking with eddy current braking; replacing passive suspension with active suspension. We also gave across the board improvements to many modules like robust controls, efficient battery management system, lighter and cheaper chassis materials. We have also been researching on levitation technology, and have a preliminary design ready for it.

With our vision to indigenously design and manufacture scalable Hyperloop technology for India and the world, we have researched and developed numerous technologies that have made our pod faster, safer, and efficient. In that regard, the Hyperloop tube is one of the most challenging elements of the Hyperloop to implement. Due to the near-vacuum conditions the pod operates in, it has to withstand atmospheric forces; withstand calamities like earthquakes along with other structural requirements. So, in a new endeavour, we have started working on designing a reliable and scalable yet cost-effective Hyperloop tube.

After this initial design phase, we'll now try to optimise by reducing the weight, optimising stability, efficient propulsion and various other system parameters. Despite all of us sitting hundreds of kilometres from each other and desperate campus reopening prospects, we are also now planning the logistics of manufacturing and equipment acquisition for the lowest possible cost. Each subsystem is preparing the list of components that they will need, looking for vendors and preparing a budget estimate. We will soon start procuring the parts, and hopefully, we'll assemble and test the pod at campus sooner rather than later.
We also plan to kickstart our sponsorship campaign soon, to gather the resources and money required to manufacture the pod.

They say well begun is half done. After having a great start with an awesome design, we are on our way to have an even awesome prototype and look forward to sweeping all the awards at EHW. The team is extremely enthused to face all challenges head-on. We hope you are too ;)