With a humble beginning in late 2017, the team grew by leaps and bounds to have qualified to the Finals of the SpaceX Hyperloop Competition 2019 by Elon Musk as the only team from Asia among the Top 21. Indeed, the experience was unparalleled, going through the rigor and that adrenaline rush to give in our best, for it was not just about our perseverance, but more about how we now had a lot of eyes tracking our work.

Having reached a peak of our lives, we were all geared up for yet another year of exploring technologies, spreading awareness and bringing more laurels to our institute and the nation at large. A couple of months passed, and we were sitting with anticipation, to hear something from SpaceX. It was November, by which time last year, we were having submissions for the Final Design Submission Round, which is the 2nd stage of the competition. Having reached out to various connections, we understood that the SpaceX was not going to be hosting the competition this time, as they had planned to work on upgrading their infrastructure for the competition from a straight 1-mile long tube track to a 10-mile long tube track with a turn, thus making it all the more challenging for the teams. This did impact our team’s mentality, owing to the fact that the SpaceX Hyperloop Competition was the sole event we had. Hence, the plans now had changed, from developing a Pod given some constraints, targets and deadlines, to focussing on Research and Development of new technologies like Linear Induction Motors and Magnetic Levitation. Together, we stood strong and vowed to give our best, having set our own deadlines to develop these technologies.

In parallel, to continue the tradition of Hyperloop Technology development and foster innovation, and support various teams across India who wished to start with teams at their own institutes/regions, we came up with a proposal of hosting the Indian Hyperloop Pod Competition, which would require student teams to submit designs, to be reviewed by selected faculty of IIT Madras, who were domain experts. The selected teams would then be invited to the institute campus with their Pods, to test run their proposal on a 400m long tube-track. Apart from nurturing new teams and giving them a flavour of what it feels like, to compete against the best from across the globe, our motive was to develop a parallel channel so that the innovation in this domain from the academia does not take a hit. Further, it could serve as an alternative platform to push the limits and support the other teams from across the globe, not completely relying on the SpaceX Hyperloop Competition. Having discussed in detail with our mentors and advisors, we realised that this was one of the best ways to leverage on our lead and technological advancement, whilst giving a helping hand to all the other teams who were starting afresh in their journey. The plan was so set up the track at the Discovery Campus, IIT Madras and host the competition during the summer of 2020.

Meanwhile, a few months later, around January 2020, we received news about the 2020 Desert Hyperloop Competition being organized by the Arizona State University. This seemed an exciting opportunity for our team to gain the lead and test our newly developed technology – Electrodynamic Wheels. If successfully run, we would have become the first team across the globe to have tested and run a Hyperloop Pod with electrodynamic wheels at a public event. We submitted our design and had qualified to the finals of this competition, which housed a 50m track. Yes, 50m. This brought about several doubts if it were worth to actually travel to the US for this competition, while we ourselves had a 30m track, and were in process of developing a 400m long track for the Indian Hyperloop Pod Competition. 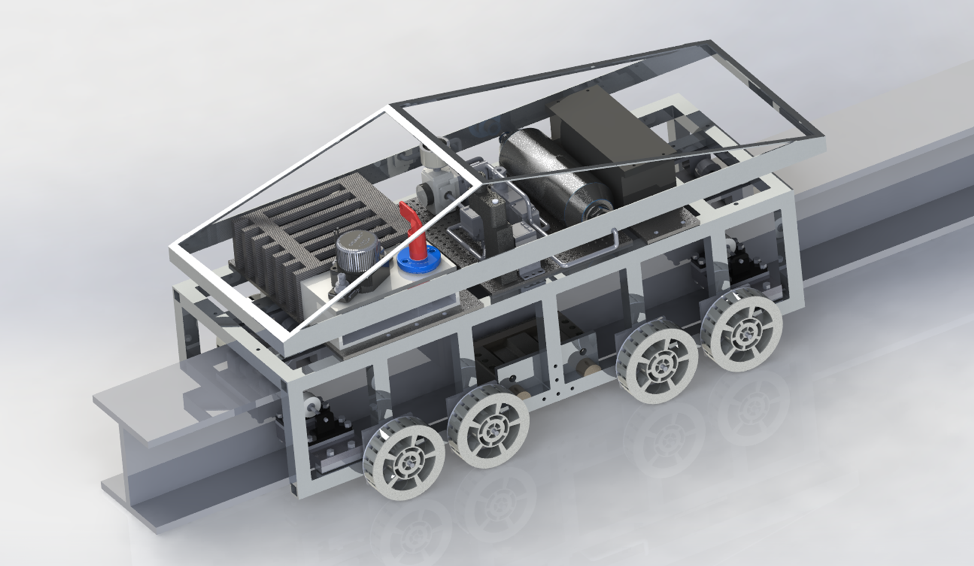 In the meantime, COVID-19 happened and the spread had begun. As a result, the competition was eventually called off. Further, all of us had to pack our bags and travel back to our homes, given the increasing effect of the virus spread into becoming a pandemic. We left everything as it was at the institute, locked up our workspace, and left to our homes. This served as yet another challenge, given the uncertainties and quick adaptability for a technology development team to be working from home. Hence, we tried our best to continue working on our designs and optimizing as much as we could.

Overall, this tenure was indeed out of the way, with various unforeseen challenges that cropped up, which were dealt as best as we could, having designed a Pod for a 400m track, in less than 40kgs, small enough to fit into a suitcase. This was supported by technological advancements in Linear Induction Motors and Electrodynamic Wheels. As we reach the end of a tenure, the responsibility is now being shifted to the new Team Heads. We thank the Team Heads of the previous tenure, Aditya, Kalpesh and Pranit, for a job well done, and congratulate Kishan and Neel, for being selected to head the team in the upcoming year 2020-21. The mantle is passed on to two enthusiastic individuals, who been a part of the team for over two years, since 2018. Kishan comes with technical expertise and experience, having heading the Power Systems Team of Avishkar Hyperloop, last year, and supporting the LIM and Levitation subsystems as well. Neel brings in a good flavour of business mindset, having worked with various subsystems, starting from the Business Team to his latest involvement in the Controls Team. While Kishan and Neel take the responsibility, they will be supported by Anshul, Parth and Saud as Group Leads for the team in the upcoming tenure. The leadership team comprising of these five members, creates a perfect blend of technical and management skills from various aspects.

Given the current situation, where are members are situated at their respective homes, the team has decided to not let this affect the developments, and continue working from home, in aspects that be worked upon, such as Software Learning, Literature Study and Product designing. The major goals for this year include

We take this opportunity to thank IIT Madras’ administration, our Director and Deans, Centre for Innovation (CFI) and various Institute Professors for having helped us have a smooth journey. We would express our gratitude to Prof. S.R. Chakravarthy and Prof. T.M. Muruganandam, our Faculty Advisors, and Mr. Ravi Santhanam and Mr. Seshan Rammohan, our Team Advisors, for their timely support and guidance to the team at various critical junctures. Lastly, we thank our Sponsors, Donors, Supporters and Well wishers like you, to have constantly believed in the team and its endeavours. This has served as a great motivation to the team and pushed the members to not only aim high, but also achieve those targets.

Once again, we thank everyone who played a role and helped us reach where we are today. We look forward to your continued support in any form, as you deem fit for our team.